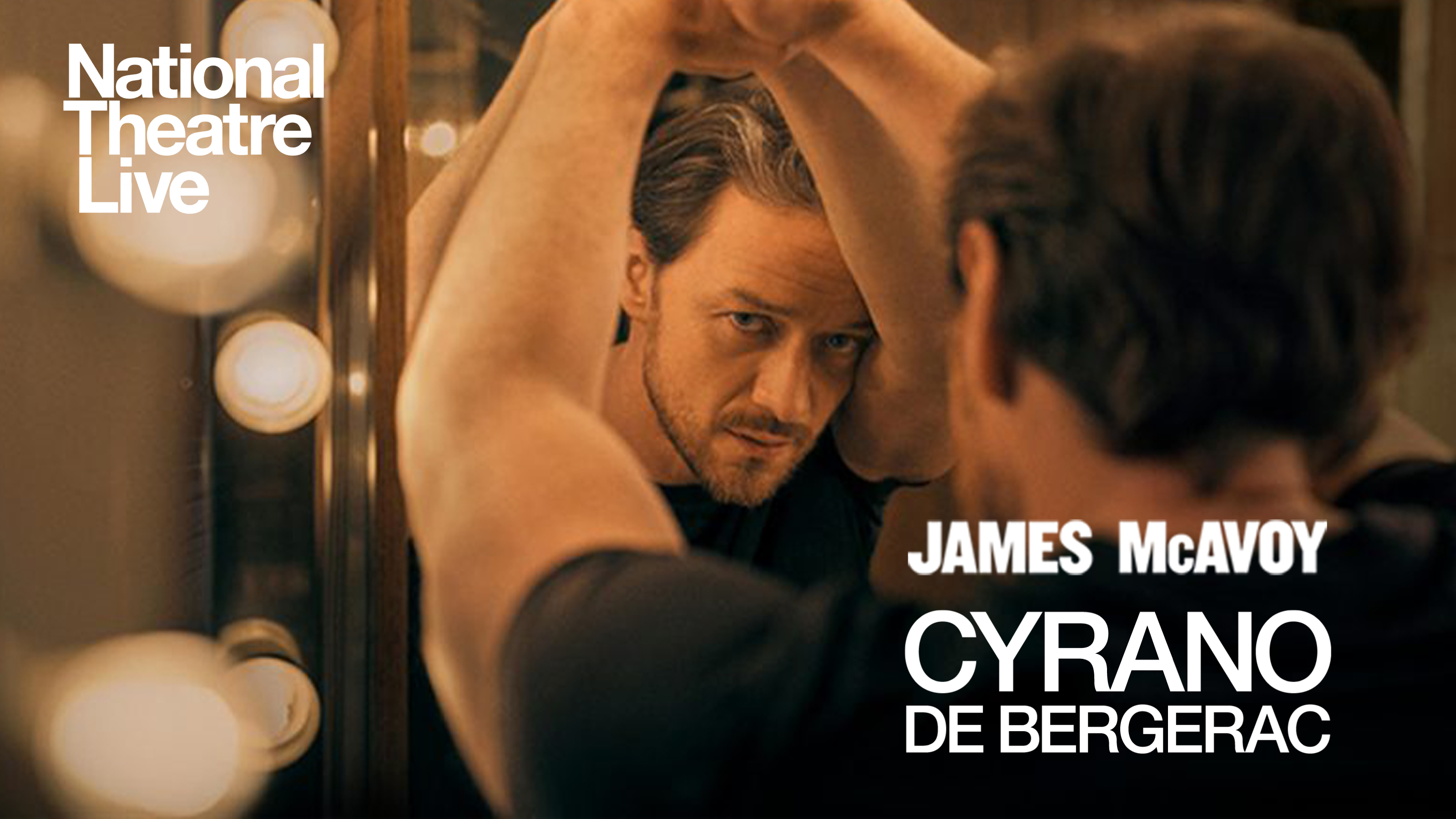 Fierce with a pen and notorious in combat, Cyrano almost has it all - if only he could win the heart of his true love Roxane...
Director: Jamie Lloyd
Starring: James McAvoy, Anita-Joy Uwajeh, Nima Taleghani
Running time: 3h (the full running time, inclusive of trailers)
James McAvoy (X-Men, Atonement) leads in this inventive adaptation of Cyrano de Bergerac, returning to cinemas due to unprecedented popularity. It was first broadcast last autumn from London's West End.

A magnetic soldier full of swagger and brilliant poet, Cyrano de Bergerac is in love with his beautiful and intelligent cousin Roxane without her knowing. His one curse in his life, he feels, is his large nose and although it may have been a forming influence in his razer-sharp wit, he believes that Roxane will reject him.
When the handsome but unpoetic Christian falls for the beautiful Roxane, he asks Cyrano to help him win her heart. Cyrano de Bergerac can be delivered as an allegory of inner and outer beauty.
Edmond Rostand’s masterwork is adapted by Martin Crimp, with direction by Jamie Lloyd (Betrayal). This classic play is brought to life with linguistic ingenuity to celebrate Cyrano’s powerful and resonant resistance against overwhelming odds. Enter The Dragon
One of the greatest and most influential martial arts films of all time, and Bruce Lee’s final feature, returns to our big screens…
Order tickets Harry Potter and the Philosopher's Stone (2001)
The first film from one of the world’s greatest fantasy franchises, adapted from the books by JK Rowling…
Order tickets Ever find yourself questioning if magic still exists? Well you aren’t alone… Harry Potter and the Chamber of Secrets (2002)
An ancient prophecy seems to be coming true when a mysterious presence begins stalking the corridors of Hogwarts, leaving its victims paralysed…
Order tickets Regardless of his fluffy exterior, can Freddy prove he’s still 100% wolf? When Harry Met Sally
The all-time classic romantic comedy, chosen by you for our Customer Choice programme...
Order tickets Harry Potter and the Prisoner of Azkaban (2004)
Harry's life is in mortal danger again, this time more than ever, in the third film in the series...
Order tickets Harry Potter and the Goblet of Fire (2005)
Based on JK Rowling’s fourth book, this film is the heart of the phenomenal Harry Potter series…
Order tickets Harry Potter and the Order of the Phoenix (2007)
Harry’s warning that Lord Voldemort has returned is scoffed at and the Wizard authorities slowly seize power at Hogwarts….
Order tickets Harry Potter and the Half-Blood Prince (2009)
Adolescent wizard-in-training Harry Potter returns to Hogwarts for another year of schooling and receives more clues, than answers to his burning questions…
Order tickets Harry Potter and the Deathly Hallows – Part 1 (2010)
The beginning of the ending, to the epic and beloved Harry Potter story…
Order tickets NT Live Encore: A View From The Bridge
Following its smash-hit original broadcast, the Young Vic’s ‘magnetic, electrifying, astonishingly bold’ production of A View from the Bridge returns to cinemas due to audience demand...
Order tickets